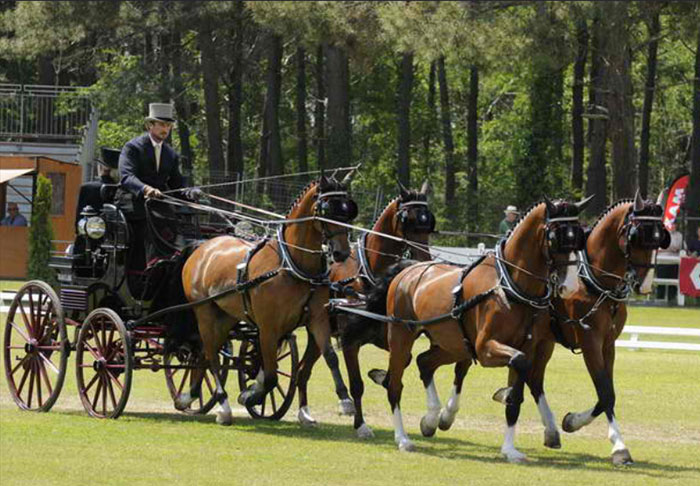 Ocala, FL (June 17, 2013) – His Four-in-Hand finesse in Dressage and Cones has long made nine-time US National Champion Chester Weber of Ocala, Florida, a force to be reckoned with, but a masterful wire-to-wire lead across all three phases of the Saumur CAI-A4, June 7-9, in France, has the combined driving world taking note of a keen new edge to the American master.
With a major international win already secured, at only the first show of his European season, and Aachen and Normandy on the not-so-distant horizon, Weber is throwing down the (driving) glove: “The horses are ready for Aachen. This was the first big international marathon victory of my career,” the two-time FEI Four-in-Hand Driving World Championship Silver Medalist added, clearly thrilled with
the decisive performance by the team he co-owns with Jane Clark, over a “tough” course by French designer Jacques Tamalet.
In his first return to the Saumur since 2001, Weber’s strategy put trotter Horus du Bois to lead for marathon and cones, and dressage lead, Splash, to right wheel. Completing the Saumur strategy was the popular Boris on left wheel for dressage and marathon; Para to right wheel for dressage and to left for cones; and Uniek at left lead throughout.
“Winning the Dressage (32.66 penalties) is something we have been fortunate to become accustomed to,” said the man nicknamed ‘Mr. Dressage,’ “but this was our first big Marathon victory. It was a World Cup qualifier and many of the best were there, including two members of the Dutch Gold Medal team: Ijsbrand Chardon and Theo Timmerman. Moreover, Chardon without a doubt is the winningest driver the sport has ever had.”
Leading the field of 21 after Dressage, Weber posted the best Marathon score of the Four-in-Hand division (89.28) to remain atop the leader boards, followed by a nearly picture-perfect Cones: a single ball drop drew a scant three penalties. In an unprecedented personal achievement, the American driver clinched all three combined driving phases, against one of the world’s toughest FEI rosters of teams, for an overall finish of just 128.50 penalties.
Weber is confident his team is in top form for Aachen CAIO-4: “Our decision to go to Saumur was a building block in our strategic plan. The marathon there was sandy and hilly, both of which made it challenging for the horses. The team is ready for Aachen. This was one step as Jane Clark and I keep our sights on the World Equestrian Games in Normandy.”
Follow Team Weber at www.chesterweber.com and via the link to Facebook.
Photo: Team Weber in the dressage at the Saumur CAI. (Photo courtesy of PixelVisuel.com)