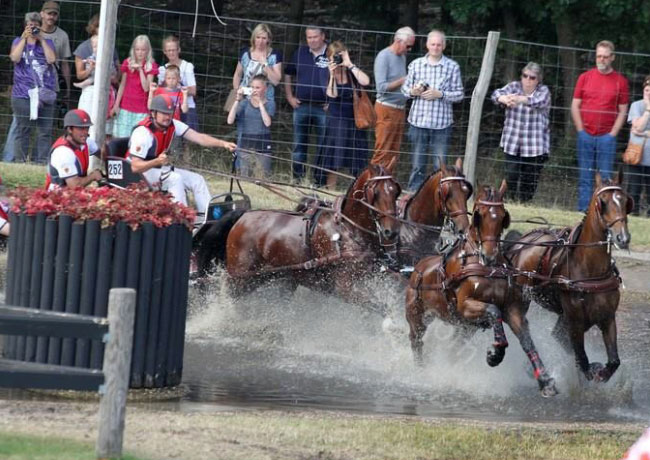 Ocala, FL (July 23, 2013) – With his signature flourish in the dressage phase at the Beekbergen CAI-A4, July 18-21, in The Netherlands, nine-time U.S. national driving champion Chester Weber set an early lead (32.97) with an Ultra-good performance.
As in Koos de Ronde’s Ultra, an 11-year-old KWPN gelding that Team Weber has had their eye on for the last two years but, like any top professional athlete, it was a matter of waiting until Ultra became a ‘free agent.’
“Koos de Ronde still owns Ultra and Jane Clark is leasing with an option to buy him,” said Weber. “We have tried for two years to get a deal done with Ultra. Patience seems to have paid off. Koos has had Ultra since 2011 and we have had our eye on him, watching his results and progress, since day one.”
Beekbergen was Ultra’s debut with Team Weber and the results speak for themselves: “We drove Ultra all three days in the left lead and were able to set a personal best score with Ultra in dressage along with Splash, and he did a magnificent job with Boy in the lead for Marathon and Cones. Boris was again in the left wheel both days and seems to improve with each event.”
The four-in-hand team of Boris, Ultra, Splash, and Senate delivered an 88.43 performance in Marathon to position Team Weber seventh, and rallied in Cones to fourth-place with a lean 6.46 points score. The team’s final total of 127.86 points overall led Weber to third-place on the podium with Australian winner and driving heavyweight, Boyd Excell, and Ultra’s owner, Koos de Ronde for The Netherlands.
Follow Team Weber as their medals quest continues towards Normandy and the 2014 World Equestrian Games, at www.chesterweber.com and via their link to Facebook.
Photo: Team Weber on the marathon couse at Beekbergen. (Photo courtesy of Rinaldo de Craen)