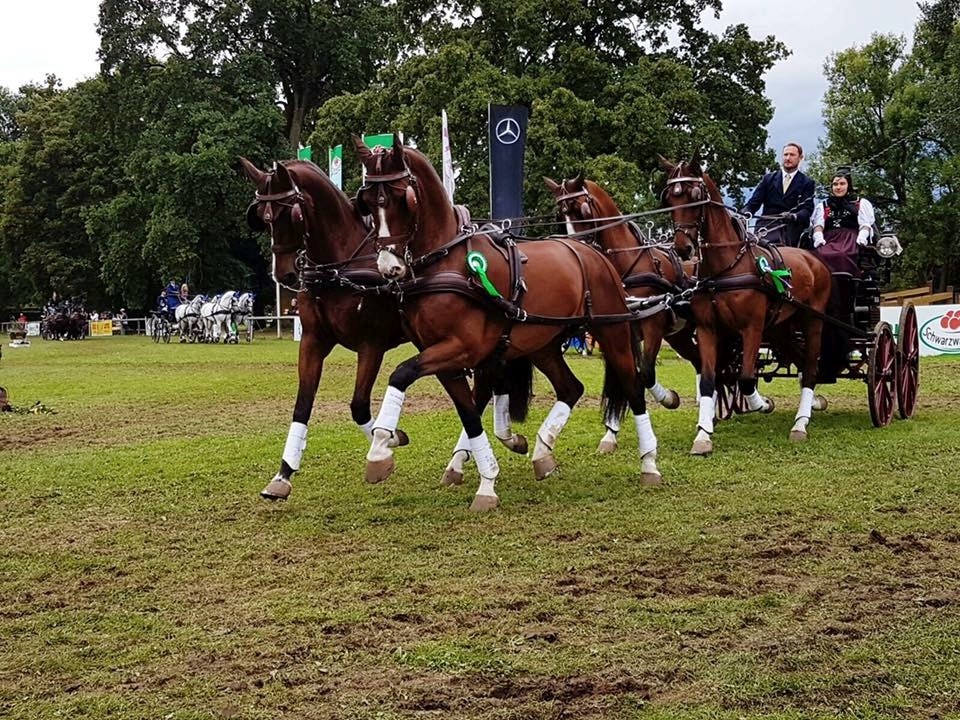 Donaueschingen, Germany (September 29, 2017) – Chester Weber offers no rest for his rivals. When the 14-time USEF National Combined Driving Champion withdrew from the Breda CAIO4*, The Netherlands, to allow one of the team horses to recover from an elevated temperature, the world renowned driver turned his attention to competing in Donaueschingen, Germany. Keeping the welfare of his and Jane Clark’s horses foremost, and sure that all of them were feeling their best, Weber rolled through the three phases of competition in Donaueschingen, emerging the definitive winner of the Combined Driving Four-In-Hand CHI3*.

Among 21 starters, Weber marked an impressive score of 35.92 in the dressage phase with the powerful KWPNs, which included 14-year-old Splash in the right lead, 8-year-old First Edition in the left lead, 12-year-old Asjemenou at right wheel, and 11-year-old Boris W. at left wheel. The bay geldings performed their best, and with several outstanding horses on the team’s roster to choose from, Weber mixed up the order of things moving into the marathon.

“In the marathon it was the same team but eight-year-old Reno took the right lead and Splash came out. Reno is a new horse on the team, and possesses an interesting pedigree. He is half Friesian and half Orlov Trotter, a Russian breed,” Weber, of Ocala, Florida explained. “We drove him and liked him, and thought that he would prove helpful to us in the marathon; he’s been doing just that. We purchased him from Hungarian four-in-hand driver József Dobrovitz, Jr.”

Added to the usual expected challenges of the marathon phase were rain and a soggy track, where Team Weber incurred penalty points but recorded a 102.93. “It’s a tough track there,” he explained. “It was muddy, but they fared well. It was a pity we had two knocked down balls, and that cost us the win in the marathon.” Team Weber rounded out the weekend with a good placing in the cones phase, and secured the overall top placing.

With his sights set on delivering peak performances at the World Equestrian Games in Tryon, North Carolina, and known for his goal-oriented nature, laser focus, and dogged determination, Weber is using this year to build and fine tune his program. “It takes time competing to get it all put together, and I think that is the benefit of going to Europe in a non-championship year so we can really try new things,” he remarked. “Next year, it will be a little bit more homogenous in what we are going to do. We will figure out what works the best and work at refining that.”

As Team Weber moves through the latter part of 2017’s competition schedule, the new team of Lipizzaners, still stabled in Europe, will make a showing at several driving events in Holland. Come late 2017 Weber will focus his competitive energies stateside–along with many other major players in the sport of Combined Driving who winter in Central Florida–with plans to attend the Combined Driving Event at Grand Oaks, Weirsdale, Florida, in early December.

In the meantime, while Weber jets between the U.S. and Europe to keep his teams competing on the international stage, the three-time World Equestrian Games Silver Medalist always places his horses’ welfare foremost in his mind. Aside from catching up on much needed sleep in between trips, Weber explained his schedule when he returns home, saying, “I rest, go through mail, and try to get everything organized. When the horses return, we make sure the stable is in order and that we have all the quality hay and supplies we want for them. Now that the KWPN’s are all back, they are having easier days hacking and also spending time in the paddock.”

Weber, who continues to be a major contender in the international world of four-in-hand combined driving, is also dedicated to promoting the equestrian sport of driving on a national and international level. For Team Weber updates, results, photos, and combined driving news as competition in Europe continues, follow Chester Weber on his official Facebook page, Instagram @ChesterWeber, or visit www.chesterweber.com.