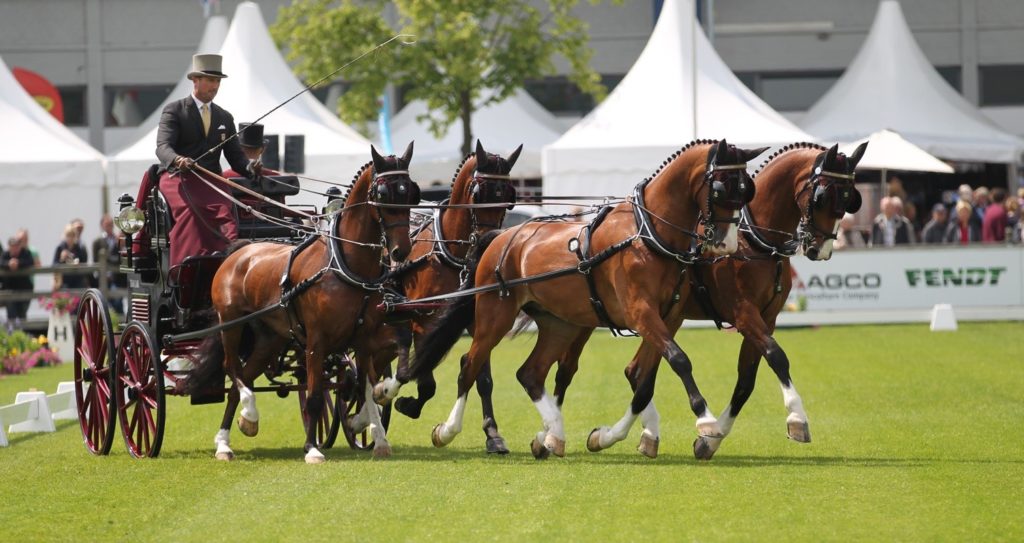 Ocala, Florida (May 19, 2017) — Chester Weber, 14-time USEF National Combined Driving Champion, is taking his show on the road – or, more accurately, across the Atlantic – to spend over four months competing in Europe with Jane Clark’s and Weber’s four-in-hand KWPN team.

No stranger to international success, Weber has three World Equestrian Games Silver Medals under his belt and made history in 2012 by becoming the first American to win an Individual Silver Medal in the Four-In-Hand FEI World Driving Championships. He won England’s Royal Windsor CAI3* two years in a row and was congratulated personally by her Majesty Queen Elizabeth II. In 2014, Weber made the record books again as the first American to win the Four-In-Hand division at the CHIO Aachen. Weber made another trip to the International winner’s podium in the summer of 2016, when he took top honors at the CAI 3* tournament in Drebkau, Germany, and later took third overall at the CAIO 4* of the CHIO Aachen World Equestrian Festival in Aachen, Germany. He then rounded out his tournament schedule by finishing fourth individually at the 2016 FEI World Driving Championships for Four-in-Hand in Breda, the Netherlands.

“Europe is not only where the world’s top drivers often come from, but it is also where the heart of the sport lies,” Weber said. “If you want to break into the top five in the world rankings, you have to go there to compete against the other teams in the top five.”

Never afraid to test his skills against his peers at the top of the sport, Weber is eagerly anticipating his annual trip to compete in Europe. This summer’s European tour will serve him and his equine team as ongoing preparation for the 2018 World Equestrian Games in Tryon, North Carolina.

“We have a couple new horses on the team this year that we feel pretty bullish about, but our big goal right now is preparing the horses for the World Equestrian Games, so that’s what this summer’s about,” Weber stated.

Weber knows that being a top contender in Europe will depend not only on his horses’ fitness, but also on himself and his entire team. Weber and his staff have been dedicated to keeping themselves in as peak athletic condition as their horses are. “We take our preparation for Europe very seriously – not only the horses, but the entire team,” said Weber.

Weber and Jane Clark’s team of KWPN horses will depart the United States on May 27, and return in early September. Weber will be staying in the U.S. a bit longer than the horses, as his wife just delivered a baby boy, Hugo Wyatt Weber, on May 16. The family will enjoy some quality family time with the newest addition to Team Weber while the horses and the rest of his team settle into their stable in Frankfurt, Germany, which will serve as their home away from home while abroad.

Team Weber will kick off the summer European tour in Saumur, France, at the Saumur CAIO4* from June 7-11, where Weber won first place in 2014. Weber’s European schedule includes competitions in France, Germany, and The Netherlands, as follows:

This year, Weber’s team includes some younger horses that will be touring Europe for their first time. These newer horses have been proving themselves in their latest U.S. competitions, keeping Team Weber’s dressage scores in the mid 30’s. Weber is confident that his team has now hit its stride and is ready to dazzle the judges and fans in Europe.

Weber, who continues to be a leading figure in the international world of four-in-hand combined driving, is also dedicated to promoting the equestrian sport wherever his travels lead him. For Team Weber updates, results, photos, and combined driving news, follow Chester Weber on his official Facebook page, Instagram @ChesterWeber, or visit www.chesterweber.com.