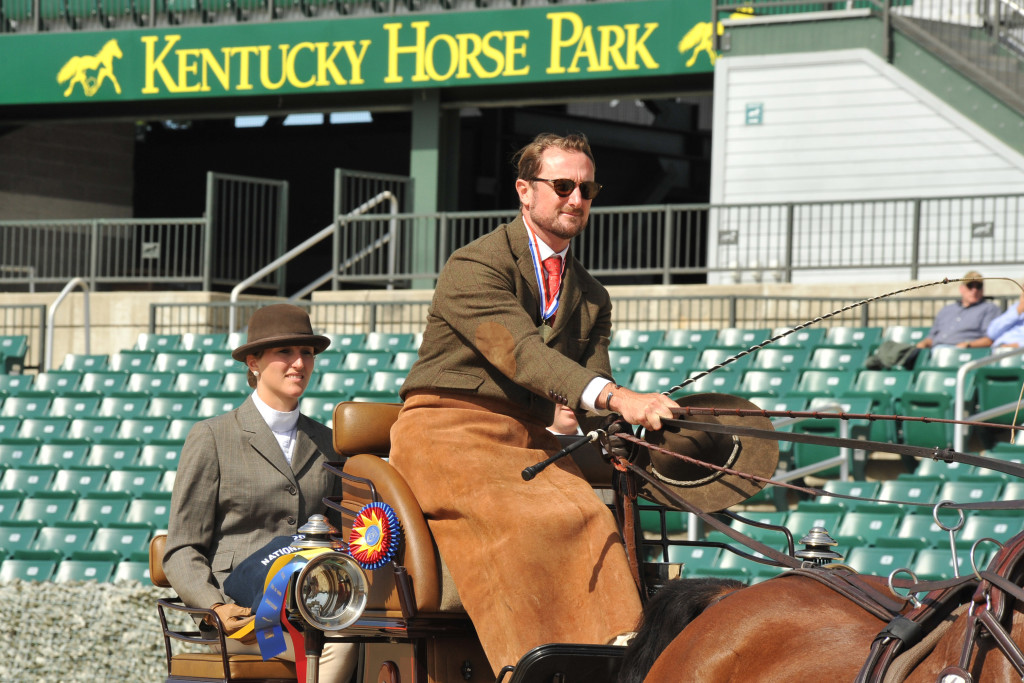 Lexington, KY (October 6, 2015) — ‘When it rains it pours,’ they say. Yet even the perfect storm predicted by local weather forecasters could not stand in the way of a historic
twelfth USEF National Four-in-Hand Championship for Ocala, Florida horseman Chester Weber. Weber piloted his four matched bay KWPN geldings, co-owned by Jane F. Clark, in the Kentucky Classic CAI2* to defend Team Weber’s title.

Team Weber delivered clean and decisive victories across a spectrum of phases and weather conditions. The four-in-hand division opened under dark and rainy skies, necessitating the
relocation of the tests from their traditional grass arena into the Rolex Stadium. A fresh combination of KWPN Dutch Warmblood veterans Ultra, Para, and Boris W, paired with rising star Danzer, didn’t miss a beat. The team delivered brilliant trot work and a confident rein back for the Ground Jury of Martha Hanks-Nicoli (USA), Marsoe LaRose (CAN), and Nikke Palsson (SWE). “It was exciting to have younger horses do so well,” said Weber. “Rolex Stadium had a nice feel.”

Despite a continuation of the inclement weather into Saturday’s Marathon, Team Weber performance remained unbeatable. They not only won over cross-country marathon but also posted the fastest times in their division on five of course designer Richard Nicoll’s seven obstacles. “The horses were very fresh in the cool, damp weather in Kentucky this past weekend,” Weber adds.

“I was pleased with the team, they worked well together,” Weber said. “I had Boris in the left wheel and Para in the right wheel. I have driven them a lot this way, but I haven’t really competed them in the cones phase; I was pleased with how they handled everything. Unfortunately, I had one down that I think Danzer kicked. He is inexperienced, so the
way that the course was set up— having to drive between two cars— made him unsure. He lost his concentration, and dropped out of the contact. Besides that I was pleased. We drove to plan and it was pretty straightforward.”

After making history with his twelfth USEF National Four-in-Hand Championship, Weber continues train for future successes with his KWPN team.

Team up with Team Weber as they drive next to the 6th Annual Hermitage Classic on October 16-18 in Goshen, Kentucky. Follow news, live posts, video and photo galleries, and preferred product reviews at www.chesterweber.com