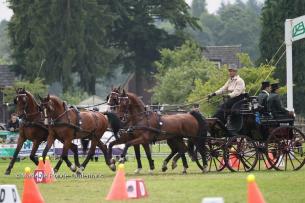 Ocala, FL (July 21, 2015)— Chester Weber returned to The Netherlands on July 16-19 for the Beekbergen CAI 3*, masterfully winning its Cones phase with the only fault-free performance of its division and finishing fifth overall among its international entries. The Ocala, Florida horseman demonstrated anew why he and his matched bay KWPN team are in the top ten of the Four-in-Hand FEI rankings.

The Beekbergen CAI 3* served as a World Cup qualifier for fellow driving four-in-hand competitors contending for the European Championships in August in Aachen, Germany.
Beekbergen had more than 30 entries from nearly a dozen nations, including many of the same contenders Team Weber faced en route to the Individual Silver Medal win at the 2014 World Equestrian Games in Normandy.

“My cones team is technically nice to drive, and is a combination that I have a lot of experience with,” Weber said, praising his horses for delivering the only flawless effort in Cones at Beekbergen. The team included Weber’s 2014 WEG Silver medal-winning Uniek (aka, Nick) and Splash, a pair of 16.2-hand bay KWPN geldings provided to Team Weber by Jane Forbes Clark.

It was after a strong performance at Beekbergen three years ago that Europeans began dubbing Weber “Mr. Dressage.” The 11-time U.S. National Four-in-Hand champion did not disappoint this year, turning in a 41.29 effort in Friday’s Dressage phase to sit third by just a three-point margin behind early leaders Ijsbrand Chardon and Boyd Exell.

By Sunday, the sole American entry in his division proved his mettle, handily executing a Cones test to 0.00 perfection and claiming a slot among the top finalists in a narrow and hotly contested points spread. Team Weber finished fifth (147.83) by a tenth of a point behind The Netherlands’ Koos DeRonde (147.73). Coincidentally, DeRonde was the former owner of Ultra, another of the stalwart KWPNs on Team Weber. The overall (136.76) winner was Australia’s Boyd Exell.

Team Weber will head next to Riesenbeck, Germany for the CAIO4* beginning July 30 to August 2 before returning to The Netherlands, September 2-6, for the CAIO4* in Breda. Team Weber will then head to the United States for the CAI2* Kentucky Classic on October 1-4 in Lexington. Keep up with Team Weber’s videos, photo galleries, and international competition results at www.chesterweber.com and via Facebook