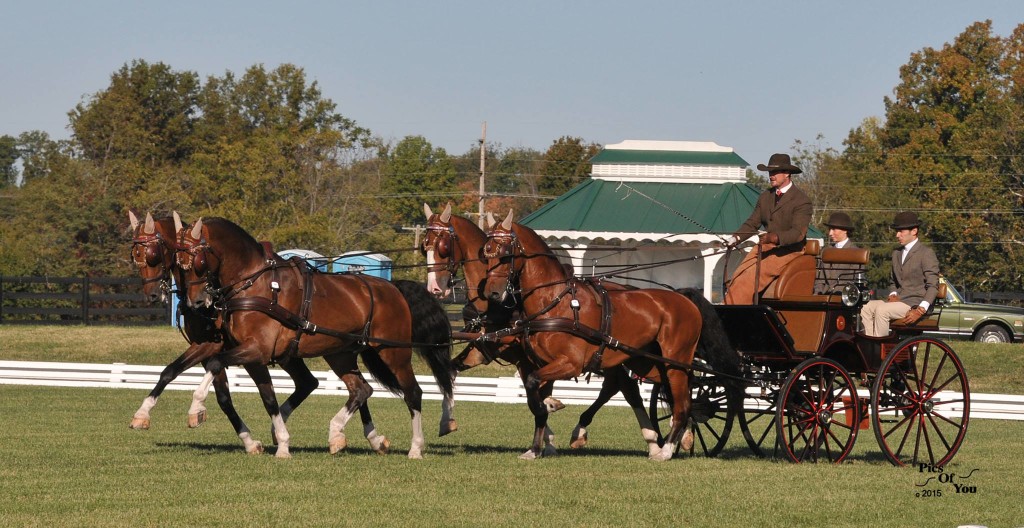 As Chester Weber went in to the Hermitage Classic’s FEI 2* opening phase of competition, he had a deep well of talent to draw from in his and Jane F. Clark’s team of KWPN bays. Weber brought Boris W, Danzer, Para, and Ultra, plus new talents Erik and Zeppelin Let’s W to Goshen, Kentucky. “I used Zeppelin and Ultra in the lead, and Danzer and Boris in the wheel in the dressage phase,” Weber said.

His decision proved wise, as Team Weber’s results were nothing short of winning for the horseman dubbed ‘Mr. Dressage.’ Weber credited his team for their 40.82 points overall for the first-place position going into Saturday’s marathon: “The horses were great. I am very pleased with them all, and plan to drive the same team tomorrow.” Leading on a 74.5 percent overall, Team Weber will face the marathon questions of multiple world championship combined driving course designer Barry Hunter of Great Britain.

Questions, said Leslie Cashion of the Hermitage Classic CDE committee, that will demand drivers’ answers. “I think one of our toughest hazards in the marathon is the newest one, which is an actual tepee and totem pole. It presents an interesting and challenging element,” Cashion stated.

“We are excited for this year’s event to be bigger than ever and to be able to share the festival with the community,” said Cashion. “The Hermitage Classic CDE is growing bigger and reaching more people from farther away each year.”

As dressage concludes, Weber looks forward to driving into the marathon phase tomorrow, and maintaining his team’s strength throughout the entirety of the Hermitage Classic CDE. Team up with Team Weber and follow news, live posts, video and photo galleries, and preferred product reviews at www.chesterweber.com