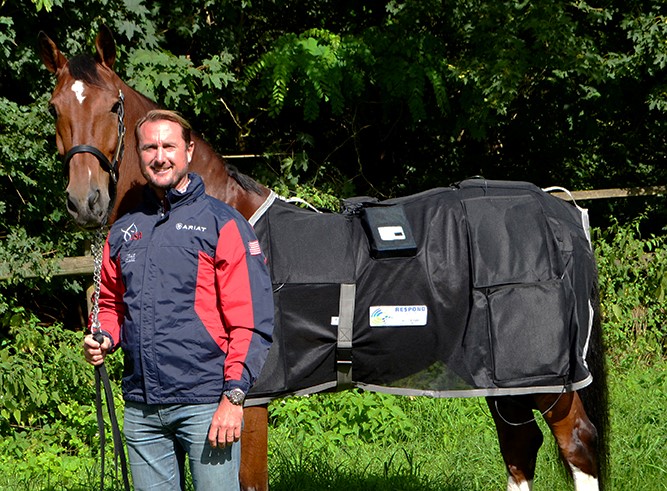 Respond Systems Sentry PEMF Blankets with therapeutic magnetic fields are a cutting edge option in caring for the sore muscles and stiff joints found in today’s equine athletes. Respond Systems blankets have been utilized by Team Weber since 2009, and help to ensure that Weber and Clark’s horses stay in tip-top shape while facing the world’s most competitive FEI drivers and teams.

Team Weber has been equipped with two Sentry PEMF full body suits, a neck piece, and hock boots, courtesy of Respond Systems of Branford, Connecticut. The company has been developing state-of-the-art veterinary therapy systems for horses and small animals since 1989.  Sentry PEMF bio-pulse blankets are designed to cover all major muscle groups. With eight large coils, (two for the topline, plus coils for the hamstring muscles and inside the stifle), this is a must-have blanket for the highly athletic, injured or aging horse. Each battery-powered blanket provides up to 20 treatments per full charge.

“In driving, with a marathon carriage being 600 kilos and the horses having to work well over their backs, Respond Systems is a big help,” says Weber. “People ask if I have worked with other magnetic products or lasers, and I have always said that I have no need to – Respond Systems answers all the questions they should. The whole crew from Respond Systems is fantastic to work with. Our therapy blankets get tuned up every fall and come back good as new. It’s a product you wouldn’t know you needed until you have one.”

Respond Systems is equally as pleased to provide the athlete and his team of high caliber horses with the tools to aid in their success. Vice President and Director of Marketing for Respond Systems, Lisa Miksis, stated that, “Chester and his team not only represent excellence in the sport, but are also an inspirational example of the magic that can happen when a team works in unison. We sponsor Chester’s team so that the horses can perform in peak condition and their bodies can keep up with the demands of that excellence. Our Sentry PEMF blanket system helps to do exactly that, and with a competing team of four equine athletes, the blankets get a lot of wear and tear. Given the intense levels of performance that the team has achieved over the last few years, in addition to the wonderful relationships we have built, we felt it was time to outfit the team with two new Sentry blanket systems! We are looking forward to cheering on the team for many years to come!”

Team Weber began its summer with a solid performance at the CHIO4* Royal Windsor Horse Show in England, then on to Drebkau, Germany to win top honors at its CAI3* tournament, and a third overall in the CAIO4* at CHIO Aachen World Equestrian Festival in Germany before Breda. Now back in Ocala for the fall, Weber is turning his focus to developing a potential new bay to the team, a five year-old KWPN gelding called Governor. Weber and his champion team will head to their next competition, the Hermitage Classic and Fall Festival in Goshen, Kentucky, on October 21-23.