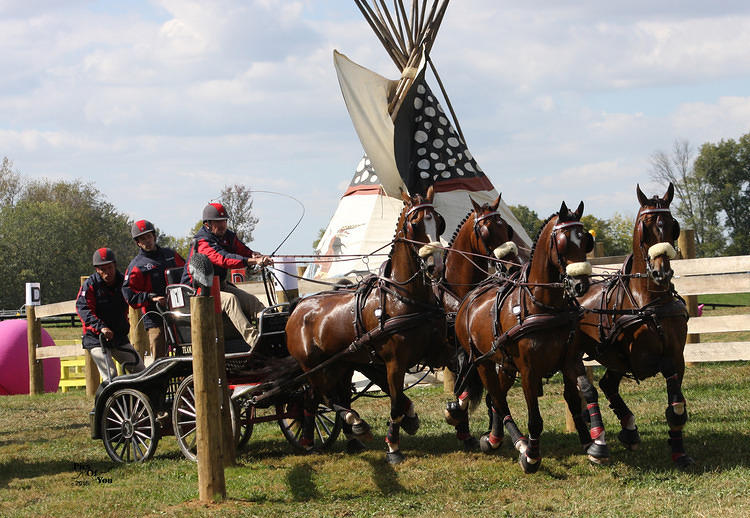 Goshen, KY— Current 12-time U.S. National Four-in-Hand Champion Chester Weber doesn’t just know how to drive horses— he knows how to pick them, too. Starting their driving careers on the team owned by Jane F. Clark and Chester Weber, KWPN geldings Danzer and Zeppelin Let’s W joined seasoned competitors Boris W and Ultra in a decisive victory lap at the sixth annual Hermitage Classic CDE on October 16-18, at the historic Hermitage Farm in Goshen, Kentucky.
“The highlight of the competition, without a doubt, were the performances from Zeppelin and Danzer,” said Weber, of Ocala, Florida. “They are new to our team, and coupling with international stars like Boris and Ultra seemed to make them instantly successful.”
Team Weber’s overall score in the FEI 2* Horse Teams division was 174.27, representing an advantageous 50-point spread ahead of closest contender Misdee Wrigley-Miller (233.52). Having won in the dressage phase (40.82) on opening day, Weber opted to keep the same four-horse combination going into the marathon. It proved to be a wise choice as Weber piloted the carriage through a marathon phase designed by multiple world championship combined driving course designer Barry Hunter of Great Britain.
Leslie Cashion of the Hermitage Classic show committee had predicted, “One of our toughest hazards on marathon will be the newest one, which is an actual tepee and totem pole. It could present an interesting and challenging element.”
It proved to be nothing that Team Weber could not handle. “I used Zeppelin and Ultra in the lead and Danzer and Boris in the wheel in dressage, and drove the same team for marathon,” Weber explained. The result was a Marathon score of just 109.15, and after closing out their cones phase on a 24.30, all four matched bay KWPNs had proven themselves unstoppable.
Team up with Team Weber after yet another four-in-hand victory by following news, live posts, video and photo galleries, and preferred product reviews at www.chesterweber.com