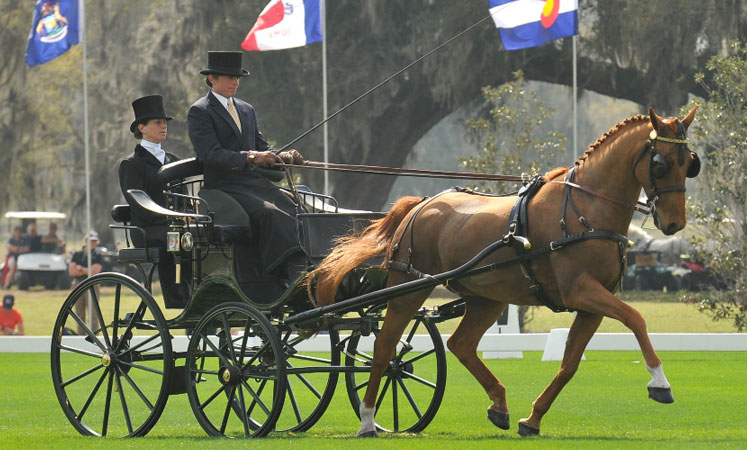 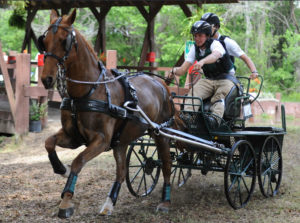 Live Oak has a long history helping drivers throughout the US, but Weber decided the time was right to take a more organized step: “There were many factors that made this the right time to start this program, including the great need to match talented competitors with world title-capable horses, raise the level of competitive driving in our country, and address the increasing cost of overseas competition.” Arnold arrives at Live Oak Plantation in Ocala in January 2014, and will train and compete a Single horse while also working as part of Weber’s training and competition team. “The program will expand,” said Weber, “as drivers show world-class potential and resources become available.” Jacob Arnold may be the program’s first beneficiary but don’t equate apprenticeship with inexperience.
The 2011 USEF Junior Equestrian of the Year spent 2013 working with nine-time National Pony Four-in-Hand Champion, Allison Stroud. He participated as head groom and backstep at events including the 2013 Pony Combined World Championships in Pau, France and, since 2010, has competed nationally in the Advanced Single Horse division.
In 2012 Arnold was short-listed for the Single World Championships. Unable to take that horse to Europe to compete, he took a working student position in Holland with Ijsbrand Chardon, and that summer Chardon won Individual Bronze and Team Gold at the Four-in-Hand World Championships in Riesenbeck, Germany.  Making a lasting impression through a program that encourages and develops its next great generation of drivers and horses, is Weber’s wish with the new year.
“My hopes for this program are to develop apprentice drivers capable of winning World Championship medals, improve the quality of our U.S. competitors, and promote driving by encouraging and supporting more young drivers to aim for competing at an international level.”
Arnold will be part of Team Weber and Team Clark as Weber aims for the 2014 World Equestrian Games in Normandy, continuing the international momentum his team, owned conjointly by both Weber and Jane Clark, generated last season after wins at the 2014 WEG test event at CAI-Caen, and CAIO Saumur, and top three finishes at Beekbergen and Aachen.
Learn more about Live Oak Combined Driving, the Developing Driver Program, and Chester Weber at www.chesterweber.com and via a link to Facebook.
Photo: Jacob Arnold will begin a mentorship under Chester Weber in January 2014 as the inaugural apprentice driver in the Live Oak Combined Driving, Inc. Developing Driver Program. (Photo courtesy of PicsofYou.com)