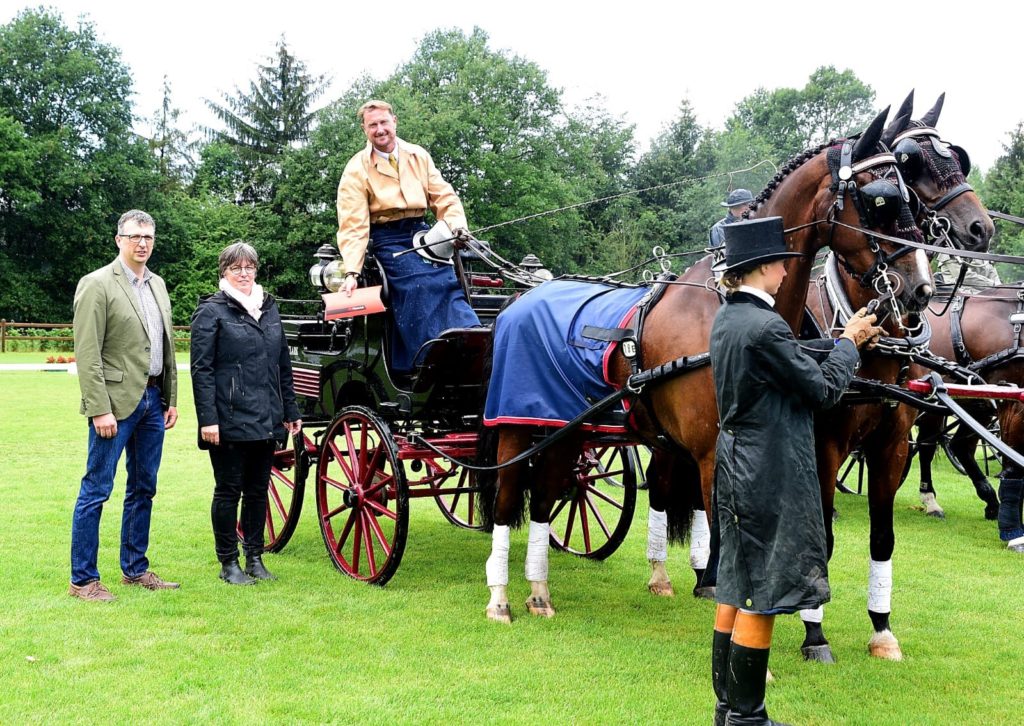 Chester Weber currently is on a run. The 43-year-old American four-in-hand driver from Florida, 15-time US champion in his discipline, has already won all three US qualifications for the September World Championships in his home country. For him and his team, this year is all about succeeding at this top event. He has already won the silver medal three times in the individual World Championship. Of course, he belongs to the favorite circle, but does not want to put pressure. “I’m always careful with predictions. My team works together so that things go well.”

At the tournament in Riesenbeck CAI3*, he won the dressage (40.35 points) ahead of the German Mareike Harm (43.71 points) and the five-time Dutch World Champion (45.19) “I am very satisfied with my horses,” says the driver, who praises the ground conditions on site and is also curious about how to master the challenging obstacles for the marathon.

His horses are in good shape. He loves real powerhouses, the spectators have already registered at the vet check. He and his Dutch coach Mieke Tergouw are especially pleased with the 7-year-old Gouveneur, who is competing in his first international tournament in Europe.

After the permeability and the accurate execution of various lessons have been queried, tomorrow, Saturday, the marathon ride through the Surenburg Forest (2.30 pm) will deal with the condition, the ability to gallop – and whether the preparation of the present carriage drivers has worked well. “Before this test we have looked three to four times at the seven obstacles in the forest; the variants that we subsequently select in the competition,” says Chester Weber, who keeps his body fit through daily strength training and jogging. The mental strength comes from the – as he says himself “detail obsessed”, who always works to deliver excellent performances – between the competitions in peace and seclusion. Barred training camps before championships are not for him, he laughs.

After the final obstacle driving with a winning round on Sunday (from 9 o’clock), all drivers are in the hot phase before the World Cup. Aachen is another highlight, then the tournament in Dutch Beekbergen, then Chester Weber goes to Florida to get the horses used to the hot climate in Tryon. A short break should be used for strength tanks for the bipeds as well as for the four-legged friends. On September 21, then start the world championships.