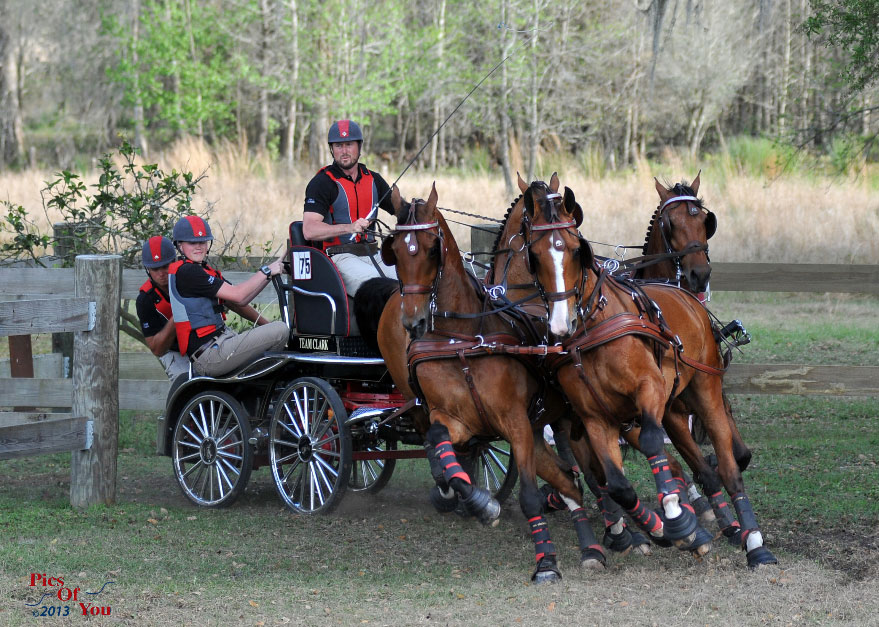 Ocala, FL (February 27, 2013) – He’s done it again. Nine-time National Four-in-Hand Champion, Chester Weber, the Ocala, Florida horseman who, in 2008, became the first American to ever medal individually in the Four-in-Hand division of the World Driving Championships, and then repeated that with two medals World Driving Championships last year, earning him another vote of confidence recently from the USEF by being named to its 2013 Driver Training Long List. Weber rewarded that wise choice with an FEI Dressage Test 11 world record (37.87 points) in his first outing of the 2013 season, winning the FEI Horse Team class in front of judges Jambon, Turbe, and Greenall, at the Little Everglades CDE, February 21-24, in Dade City, Florida.
“It seems like a great way to start the season. We are not resting on this performance. We have several things to clean up before Live Oak as we prepare for Europe this summer. We would like to be competitive in Aachen, and try to win our tenth National Championship at the Kentucky Classic,” said Weber, whose 2012 winning season included the two medals from the Driving World Championships in Riesenbeck, Germany. Weber and Team USA secured Team Bronze, and he took Individual Silver with the Dutch Warmblood horses made up of his horses and Jane Forbes Clark’s horses.
For Weber, it’s horses first, world records second: “They were great in the marathon, where our scores were competitive with some of the pairs.” He was especially praiseworthy of the team’s seven year-old bay KWPN gelding by Talos, Boris W. “Boris was used all three days on the left wheel and did a remarkable job.” Boris W, was named Four-in-Hand Driving Horse of the Year. “Boris being named the Four-in-Hand Horse of the Year was a great honor,” commented Weber, “and a wonderful way to cap off this remarkable season.”
Last fall, Boris helped drive Team Weber to victory in the Advanced Horse Team class at the Kentucky Classic. Weber had only recently added Boris and his other horse, Ringo, to the team after returning from the World Championships and spending last summer competing in Europe. “I was pleased with Boris and Ringo,” Weber stated, “as the intention of the trip to Kentucky was to develop them while supporting the sport on a national level.” The decision paid off nicely. Weber said that the horses improved greatly and their progress in the marathon training was remarkable, as evidenced by the win, as well as the Horse of the Year distinction.
Only after praising his horses did the modest record-setter add, “The test is new to the sport and has not been used at many events until now. My score is a new record. It was competitive. It could result in a top three finish at many international events throughout North America or Europe.”
When it comes to scores, Weber can give and receive: He joined Marsoe LaRose of Canada and Andrew Counsell of Great Britain on the Ground Jury, under course designer Marc Johnson, for the
Sunshine State CDE, a Florida Triple Crown of Driving event at the Florida Horse Park in Ocala, January 31 – February 3. “It was a ball. Judging offers a unique perspective, while giving back to the sport.”
Follow the record-setting progress of Boris W and the rest of the combined driving Weber team, at www.chesterweber.com and its link to Facebook.
Photo: Team Weber on course during the marathon phase of the Little Everglades CDE, where they took top honors in the FEI Horse Team class. (Photo courtesy of PicsofYou.com)