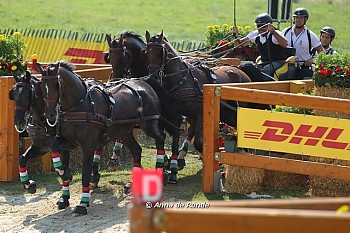 Tuesday 05 January 2016 – The successful US American four-in-hand driver Chester Weber has added to his selection of horses by aquiring twoDutch horses, previously owned and driven by the Hungarian top drivers József Dobrovitz and Mark Osztertág. The KWPNgeldings Amadeus (v. Talos) and Asjemenou (v. Patijn) will soon travel from their stables in Vecsés to Weber’s stables in the USA.

The 11-year-old Amadeus has been part of the successful Hungarian four-in-hand driver József Dobrovitz’ team for the past 6 years. Being an all-round wheeler, the gelding has contributed to many of the multiple Hungarian Champions successes, which included finishing fourth at the EC Aachen 2015.

Asjemenou, also 11 years old has been part of the team of Dobrovitz’ cousin Mark Osztertág. The team performed very well at international level and competed at the FEI World Pair Championships 2013 and 2015. The 25-year-old driving talent also used the gelding when he competed at the EC Izsák in 2014. The son of Patijn was also a contributing factor to József Dobrovitz’ first place win at the CAI3* in Altenfelden 2015.

Chester Weber is very happy with the purchase: “I am always looking to put more players on my bench. When we found out that these horses had become available, I had no intention of buying two horses, but after Michael Freund and I tested them we could not choose between them.

They are fantastic, well-worked horses and I could not be more proud to start driving these two horses.”

The horses will travel to Florida next week, where they will likely be used by Chester in his team at the first FEI event of the season in Dade City, USA. If the horses meet his expectations, it is quite likely that the horses will return to Europe this summer as Chester prepares for the World Championships in Breda.