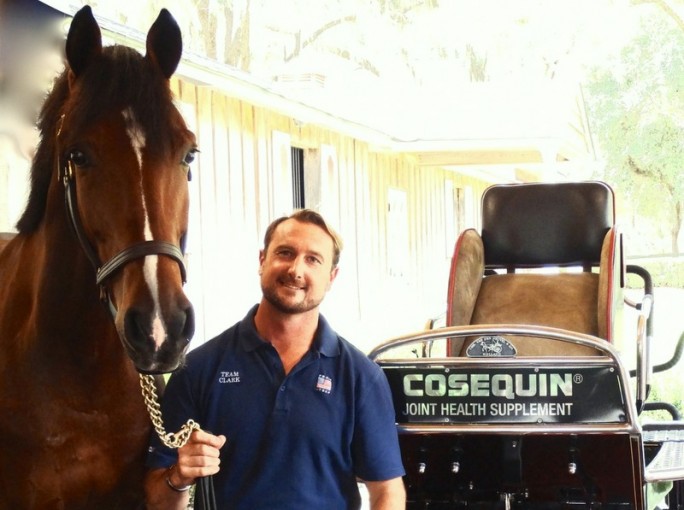 In the world of Combined Driving, Chester Weber enjoys rock star status. As of this past weekend, he is now the 12-time U. S. National Four-In-Hand Driving Champion. Similar to eventing, combined driving consists of a team of
one, two or four steeds pulling a carriage through three phases of competition – dressage, cross-country marathon, and obstacle cones.

Based out of Ocala, Fla., Weber is easily one of the winningest competitors in the sport, competing at the World Equestrian Games and throughout the world. Already

in 2015, Weber has competed both in America and Europe, earning the win at this year’s prestigious Live Oak International.

During his European tour last year, Weber became the first American to win the Four-in-Hand Division at the prestigious CHIO Aachen, followed by a Silver Medal performance at the World Equestrian Games in Normandy, France. Those accomplishments and others ranked him the Leading FEI Four-in-Hand Driver in the World.

What most don’t know about Weber is that he is an avid fan of Thoroughbreds, both on and off the racetrack.

“My family has been in the Thoroughbred business my entire life,” said Weber. “I’ve grown up around it and with it.

We have a big racing operation with about 40 horses at the racetrack.”

What the Breed has to Offer

Weber is quick to tout the attributes of the Thoroughbred, even though in his sport the breed is not commonly used.

“Thoroughbreds are wonderful. They’re super-intelligent and so versatile for pretty much all disciplines,” he said.
“Obviously they are often used for jumping and eventing after they retire from racing, but they are very adaptable.
There are several people in Germany who drive them competitively at high levels.”

Like many others who have spent time around Thoroughbreds, both as racehorses and sport horses, Weber thinks in
many cases the equestrian public has a misinformed idea of Thoroughbreds as high strung, unruly, difficult to train
animals. Weber enjoys setting the record straight.

“When I have friends and guests in from Europe who aren’t familiar with Thoroughbred racing, I love to walk them through the shed row in the afternoon,” said Weber. “The horses are napping and mellow and most are happy to calmly greet visitors. People are always so impressed that these horses are so much different than what they had envisioned.”

Advice for OTTB Seekers
There are a number of reputable sources, both public and private, of recently retired racehorses primed and ready for new careers, Weber said.

“There are so many programs that take horses on the track and help to repurpose them into riding horses,” he said. “Some of the top trainers, like Niall Brennan and his wife, place many of their own horses and are very responsible about finding the right homes for their horses.”

When shopping for a Thoroughbred to be a sport horse prospect, Weber said soundness is key. Many minor injuries can be rehabilitated to get the horse back to 100 percent, but it is always good to get a veterinarian’s recommendation for what, if any, limitations a horse might have.

As far as conformation is concerned, Weber said he has found Thoroughbreds with an uphill build to be the most successful in the show ring.

“I think the important part is finding an uphill horse with good gaits. It doesn’t seem to be important in racing.

In fact, many of the best stakes horses and 2-year-old Champions don’t have an uphill build at all, but for sport horses, it makes a big difference.”

“Thoroughbreds, and all horses really, overcome so many things when it comes to conformation and what should and shouldn’t work,” said Weber. “They take general principals and break them all the time.”

Weber is a proponent of the racing world and sport horse world creating more synergy, as in his eyes they are complimentary to one another. Thoroughbreds retiring from racing still have the majority of their useful years ahead of them, and having seen and learned as much as they have on the racetrack by ages three or four, they are often well ahead of their non-racing peers by the time they embark on a second career.

“Sport horse people need to understand that those at the racetrack – owners, trainers, riders, everyone – want what’s best for these horses. They want them to find good homes, and the better the two worlds can communicate and understand one another, the more easily this will happen.”