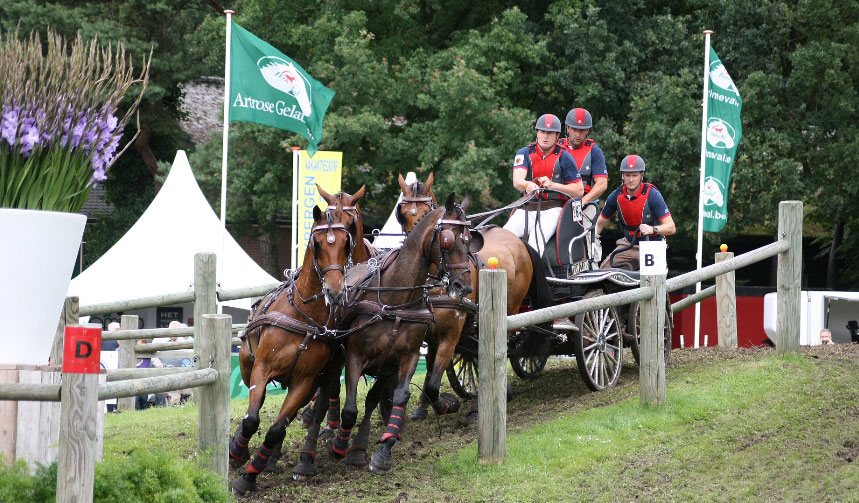 Beekbergen, Holland (July 26, 2012) – Combined Driver Chester Weber did a bit of reorganizing of his team during the CAI Beekbergen, a strategy that paid dividends on the scoreboard. Weber’s team, which is made up of a combination of horses owned by Weber and by Jane Forbes Clark, drove to an impressive 4th overall position at the prestigious show. His team’s ability to use different horses in different positions shows a great degree of depth, as he used only one horse each day from his original Aachen combination.
“I decided to use different horses in the lead and wheel positions in Beekbergen,” said Weber. “I think it was a risk, but my horses rose to the occasion.” Weber used Ringo, owned by Clark, in the wheel position all three days, and Splash, also owned by Clark, took the lead during the dressage and the wheel during the marathon. Weber was pleased with Ringo and Splash’s performance at the wheel during the marathon. “The combination of these two horses in the wheel position proved to be a boon to our team, and I think they will only continue to improve.”
Weber expressed that he was extremely pleased with the entire team throughout the event. Weber’s consistent ability to rise up to every challenge did not go unnoticed in the marathon phase at Beekbergen giving competitors and spectators alike a look at what makes Weber one of the world’s top contenders.
Weber’s now trademark win in the dressage phase was unchallenged even with the newly shuffled team. Weber won the dressage phase with a score of 44.16, that score combined with an 88.01 in the marathon, and a 3.00 in the cones put the team in the top 4 spot overall at Beekbergen. “It is evident that my horses are extremely versatile, and I am proud of our accomplishments at Beekbergen,” said Weber. “Now we will look towards the World Championships at Riesenbeck.”
For more information on Chester Weber and his team, visit www.chesterweber.com.
Photo: Chester Weber and his team in the marathon phase at the CAI Beekbergen. (Photo courtesy of Willem Hamer