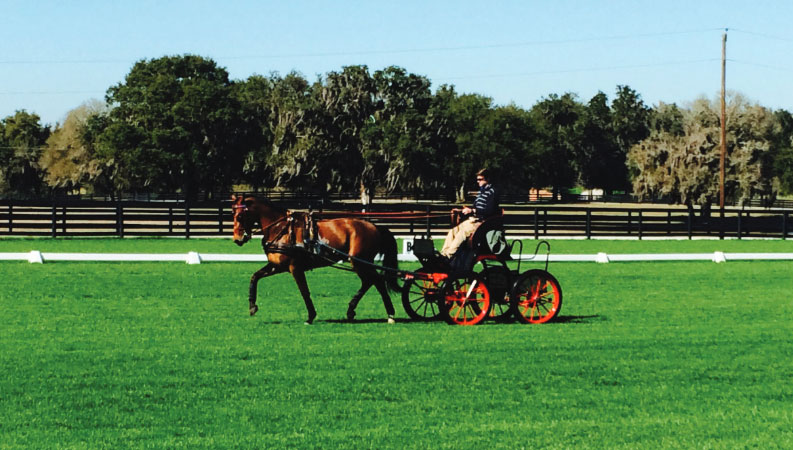 “I am very grateful for the opportunity to have a chance to drive such a talented horse. Wise Guy (aka Whooper) has shown he has what it takes to be a top-level FEI level horse for many years to come. I owe a debt of gratitude to Iron Spring Farm for sponsoring me and a big thank you to Chester Weber, who came up with this idea, and has gone above and beyond to make this a reality,” says Live Oak’s first Driver Apprentice.

“I am very excited,” Arnold continued, “as I begin this journey with such an unbelievable amount of support. I am very fortunate to have such wonderful opportunity.” Whooper’s owner, Ijsbrand Chardon, is also excited about turning his talented horse over to such a rising star as Arnold – and respected competitor worldwide as Weber. “It’s great to see a talented
driving horse help develop a young, motivated and talented driver like Jacob Arnold,” Chardon said of the 10-year old, Iron Spring Farm-bred gelding sired by Sir Sinclair ISF.

“Whooper is a very talented horse that was trained and driven by Ijsbrand as part of his Individual Silver Chester Weber’s First Live Oak Driver Apprentice Brings a Real ‘Wise Guy’ and Team Gold medal winning team at the 2010 World Equestrian Games in Lexington, Kentucky,” said Weber. “With his dynamic and vivid expression, Whooper is a correct, expansive mover that will make a lasting impression on the Single Driving world.”

“Live Oak Combined Driving has always been involved in the ongoing development of many drivers, and Jacob and Whooper represent everything the apprenticeship hopes to achieve,” said the 10-time U.S. Four-in-Hand Driving Champion of the program he has launched to give developing drivers hands-on experience competing at their discipline’s highest levels. US Team Trainer Michael Freund is also a supporter of Live Oak’s Apprentice Driver program, saying, “I think this is a fantastic opportunity for Jacob. I’m very glad Chester Weber has decided to support such a young and talented driver. This is exactly what driving in the US needs to improve the sport and move forward.”

Arnold arrived at Live Oak Plantation in Ocala, FL, in and will train and compete Wise Guy while also working as part of Weber’s training and competition team. Arnold may be the program’s first beneficiary but don’t equate apprenticeship with inexperience. The 2011 USEF Junior Equestrian of the Year spent 2013 working with nine-time National Pony Four-in-Hand Champion, Allison Stroud, as head groom and backstep at events including the 2013 Pony Combined World Championships in Pau, France and, since 2010, has competed nationally in the Advanced Single Horse division.

A Spring 2012 Selection Trial win Short Listed Arnold for the Single World Championships. Unable to take that horse to Europe to compete, he took a working student position in Holland, with Ijsbrand Chardon, the summer Chardon won Individual Bronze and Team Gold at the Four-in-Hand World Championships in Riesenbeck, Germany.

Arnold will be part of Team Weber and Clark as they aim for the 2014 World Equestrian Games in Normandy, continuing the international momentum he and his team generated last season after wins at the 2014 WEG test event at CAI-Caen, and CAIO Saumur, and top three finishes at Beekbergen and Aachen.

Learn more about Live Oak Combined Driving, Inc., the Live Oak Driver Apprentice Program, and Chester Weber at www.chesterweber.com and via a link to Facebook.