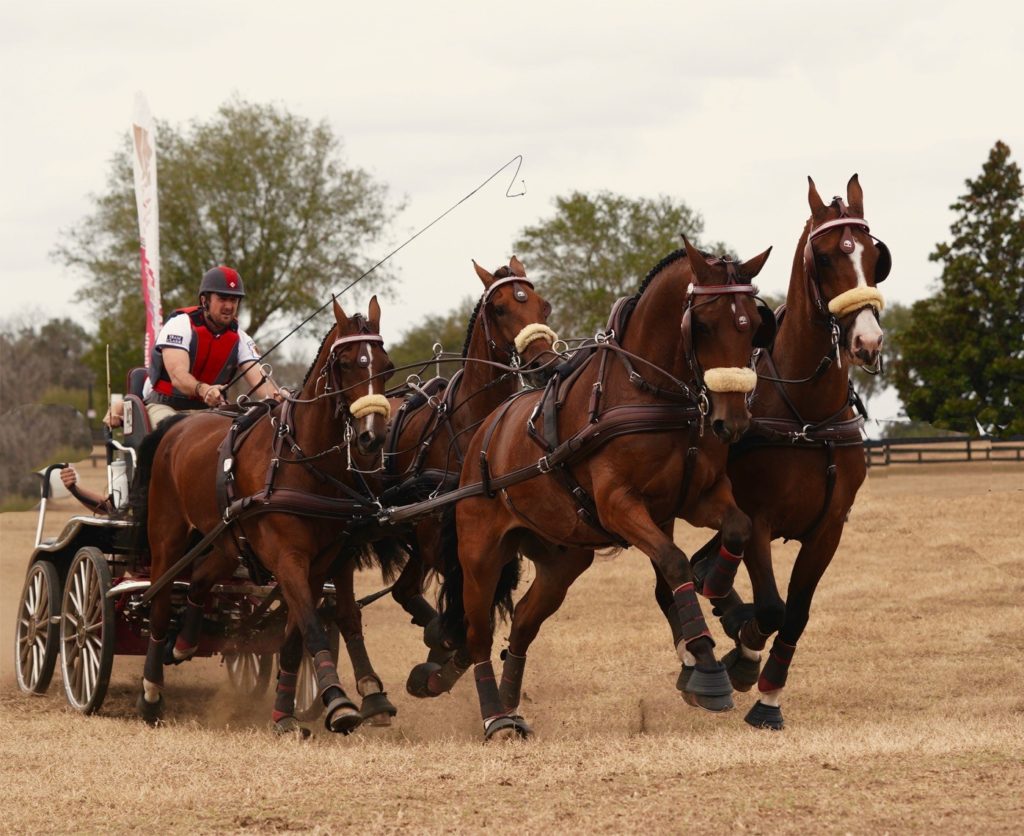 Dade City, FL (February 6, 2018) – Chester Weber, a Florida native who is known around the world for his success in Four-in-Hand driving, kicked off 2018 in the only way he could have been expected to – with a win in his first competition of the year.

After spending the winter competing in major driving tournaments throughout Europe, Weber touched down on U.S. soil to claim the top spot in the CAI 2* Palm Tree CDE Four-in-Hand division in Dade City, Florida, on January 25-28.

“I felt good about the dressage phase,” Weber, who is known for his superb execution in the Four-in-Hand dressage, shared.  “There are few areas where the team can continue  to improve. This is all part of our strategy as we work toward the National Championships coming up at Live Oak International and the WEG [World Equestrian Games] coming up in September.”

For the remaining phases, Weber was unstoppable with the matched team of KWPNs owned by him and Jane Clark. He kept First Edition in the left lead for all three phases, with Boris at the left wheel and Asjemenous at the right wheel. After the dressage phase, he replaced Splash from the right lead with Reno. The team won both the cones phase and the marathon phase to earn the overall first place score of 155.79.

Reno, a newer member of Team Weber, certainly fits in with the talented group. “Reno has an interesting pedigree; he’s half Friesian and half Orlov Trotter,” said Weber. “This was his third competition with me. He was perfect. He’s a great addition for the team for the marathon and cones phases, and we feel really pleased with him.” Weber purchased the horse from Hungarian Four-in-Hand driver József Dobrovitz, Jr. “I had been watching Reno for some time, and he had a great record,” Weber recalled. “Finally, I tested him a bit and drove him in the Beekbergen CAI3* in the Netherlands. We were very competitive there, and I was impressed with him.” The rest was history for the purchase of the horse – and it looks to be a promising beginning to Reno’s future on Team Weber.

Now that Weber has returned to the United States in winning style, he will continue to train and compete with his sights set on the famed World Equestrian Games to be held in Tryon, North Carolina in September 2018. “I am absolutely looking forward to it,” Weber said. “I think the team is really in good form.”

Much sooner, though, Weber the 14 time USEF Four-in-Hand National Champion will be competing at a major competition in his own backyard, Live Oak International this March 15-18, 2018. The prestigious show is annually held at Live Oak Plantation in Ocala, Florida, which is owned by Weber and his family.  Now focused on Live Oak and always up for a challenge,  Weber  added, “It’s always a lot of work to compete in a National Championship and also be the organizer of the event!”

As Weber and his U.S. team focus on the tournaments ahead, his Four-in-Hand team of Lipizzans that competed with him in Europe remain in France, enjoying a few months of well-deserved vacation time.

To stay up to date with the latest happenings for Weber and his talented teams on two continents, visit http://chesterweber.com/ and follow him on Facebook or Instagram.

PHOTO: Chester Weber and his four-in-hand team during the Marathon at Dade City. (Photo courtesy of PicsofYou)