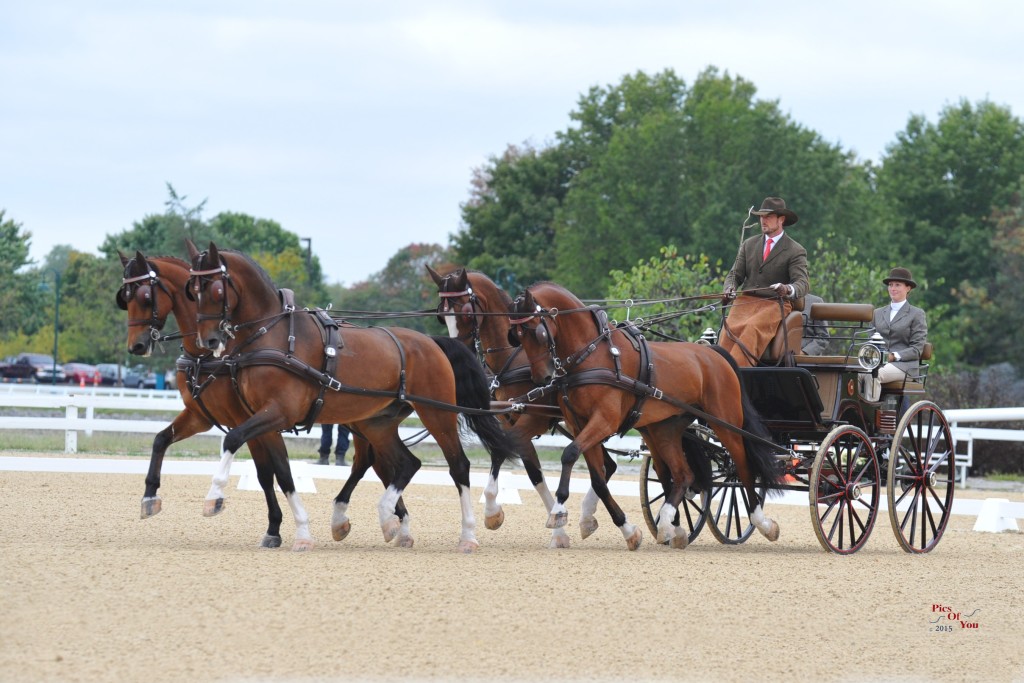 11-time U.S. National Four-in-Hand Driving champion Chester Weber of Ocala, Florida has set the stage for a chance at an historic 12th title. Weber finished first with a score of 38.07 in the opening FEI 2*

“I was really pleased with my and Jane Clark’s team (in dressage),” said Weber, who is seeking his 12th National Championship with several new and younger horses in front of him. “It was exciting to have the younger horses do so well and the Rolex Stadium had a nice feel.” Inclement weather had moved the dressage phase from its traditional grass arena to the Rolex Stadium.

The Ground Jury of Martha Hanks-Nicoli (USA), Marsoe LaRose (CAN) and Nikke Palsson (SWE), rewarded Team Weber for their trot work brilliance and strong rein back with a decisive 38.07 score, establishing an almost 10-point lead ahead of closest (45.05) contender, Allison Stroud.

Weber, who earlier this year earned his second consecutive championship and congratulations from HRH Queen Elizabeth at CAI3* Windsor, is defending his title at Kentucky against one of the most exciting four-in-hand fields in recent memory. The lineup consists of 2015 Bromont International CAI2* champion and 2013 Kentucky Classic reserve champion, James Fairclough of Newton, New Jersey. Additionally the reserve champion at Bromont, Live Oak International, Kingdom of the Sun and 2014 Kentucky Classic, Misdee Wrigley Miller of Lakewood Ranch, Florida; and Allison Stroud of West Grove, Pennsylvania, who was third at Live Oak International last spring.

The Four-in-Hand teams will face off on Saturday to match Marathon performances before title contention concludes on Sunday with the cones phase. Team up with Team Weber news, live posts, video and photo galleries, and preferred product reviews at www.chesterweber.com and its link to Facebook.