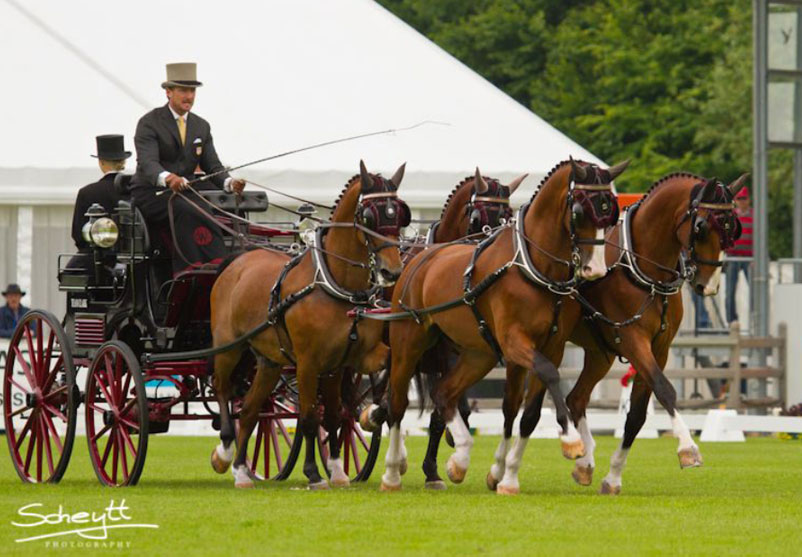 Aachen, Germany (June 28, 2013) – American combined driver Chester Weber proved himself worthy of his well-earned nickname, Mr. Dressage, by winning the Preis der Fa. Horsch – the dressage phase of the four-in-hand combined driving at CHIO Aachen in Germany. Driving his team to a personal international record score of 31.2, Weber dominated this  world-class field and beat out current World Champion, Boyd Exell for the win. “The team was fabulous to drive,” Weber described about taking the early lead in Aachen, “and it is humbling to sit behind them as they are like poetry in motion.”
Following this record score in the individual dressage, Weber also won the Team dressage Pries der Montello Immobilenmanagement GMbH & Co. with a 38.21 on Thursday, putting Team USA in second place overall behind the Dutch.
Weber’s winning team is made up of his own Para and Senate, as well as Splash and Uniek, owned by Jane Clark. Together, these four horses showed their amazing power, grace and synergy to easily take two dominate the first two phases. Proudly representing the US, Weber now leads the individual competition in Aachen. “I truly believe they are the best dressage team in the world,” Weber added about the horses with a chuckle, “but I guess I am partial to them.”
This early victory will help drive momentum as Weber continues with the marathon and cones phases of the prestigious Aachen competition. As one of America’s most driven and decorated competitors, Weber continues to be a driving force behind American four-in-hand combined driving, and promotes the sport wherever he goes by bringing in the ribbons.
For more information on Weber and his combined driving team, visit their website at www.chesterweber.com.
Photo: Chester Weber and his team during the dressage phase of the CHIO Aachen. (Photo courtesy of Scheytt Photography)