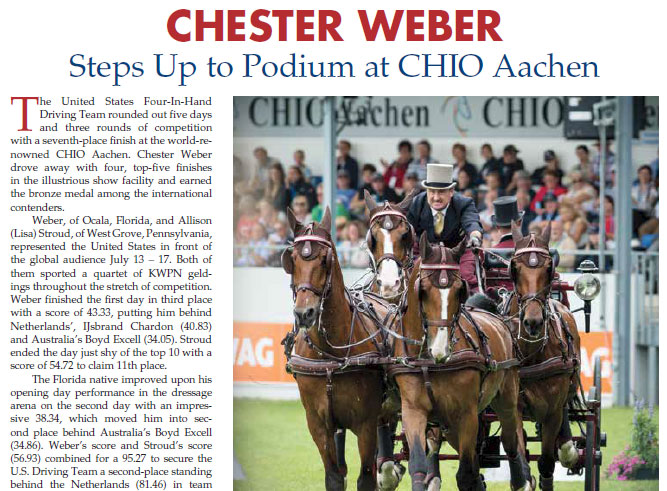 The United States Four-In-Hand Driving Team rounded out five days and three rounds of competition with a seventh-place finish at the world-renowned CHIO Aachen. Chester Weber drove away with four, top-five finishes in the illustrious show facility and earned the bronze medal among the international contenders.
Weber, of Ocala, Florida, and Allison (Lisa) Stroud, of West Grove, Pennsylvania, represented the United States in front of the global audience July 13 – 17. Both of them sported a quartet of KWPN geldings throughout the stretch of competition. Weber finished the first day in third place with a score of 43.33, putting him behind Netherlands’, IJsbrand Chardon (40.83) and Australia’s Boyd Excell (34.05). Stroud ended the day just shy of the top 10 with a score of 54.72 to claim 11th place.

The Florida native improved upon his opening day performance in the dressage arena on the second day with an impressive 38.34, which moved him into second place behind Australia’s Boyd Excell (34.86).