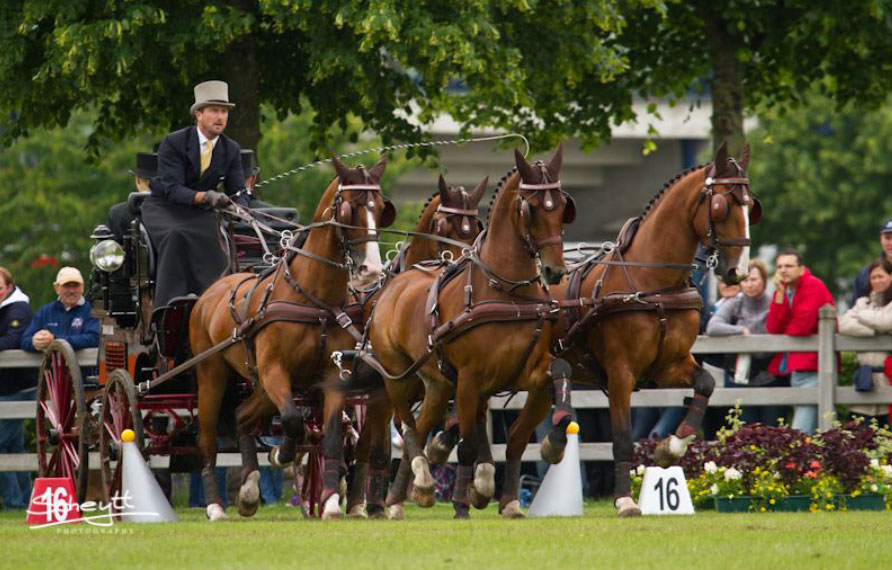 Aachen, Germany (July 11, 2013) – Chester Weber, the nine-time USEF Four-in-Hand NationalChampion, drove his way to stand on the coveted international podium in Aachen by taking a third place overall in the individual CAIO-4 competition. Proving himself worthy of his well-earned nickname, Mr. Dressage, Weber started things off by winning the Preis der Fa. Horsch – the dressage competition for four-in-hand drivers of the CHIO. During this first phase of the competition, Weber drove his team to a personal international record score of 31.2 , and dominated this world-class field by beating out reigning
FEI World Champion, Boyd Exell for the win.
Weber followed things up the next day with a win in the team dressage and a fifth place finish in the cones phase; then he and his team successfully navigated the Wohnwelt Pallen Marathon course to take 14th place on the final phase, which earned him a third place overall finish. Standing on the podium in this prestigious world-wide competition, was certainly a proud moment for Weber and his amazing team of horses. “We will compete at Beekburgen and Caen to hone our skills,” said Weber, “then will return to the US in September to prepare for the National Championships in Kentucky.” Weber also
added that all of the horses are training well, and that the 2013 summer tour is an important stepping stone for them on the way to the end goal of the 2014 World Equestrian Games in Normandy.
Weber’s winning team for this European season is made up of his own Para, Senate, Horus du Bois, and Boris W, as well as Splash and Uniek, owned by Jane Clark. Together, these horses showed their amazing power, grace and synergy both in Aachen and at the Saumur CAI-A4 in June, where Team Weber and Clark maintained a wire-to-wire lead to take the win.
As one of America’s most driven and decorated competitors, Weber continues to be a driving force behind American four-in-hand combined driving, and promotes the sport wherever he goes by bringing in the ribbons.
For more information on Weber and his combined driving team, visit their website at www.chesterweber.com.
Photo: Team Weber competing in the cones phase at the CAIO Aachen. (Photo courtesy of Scheytt Photography