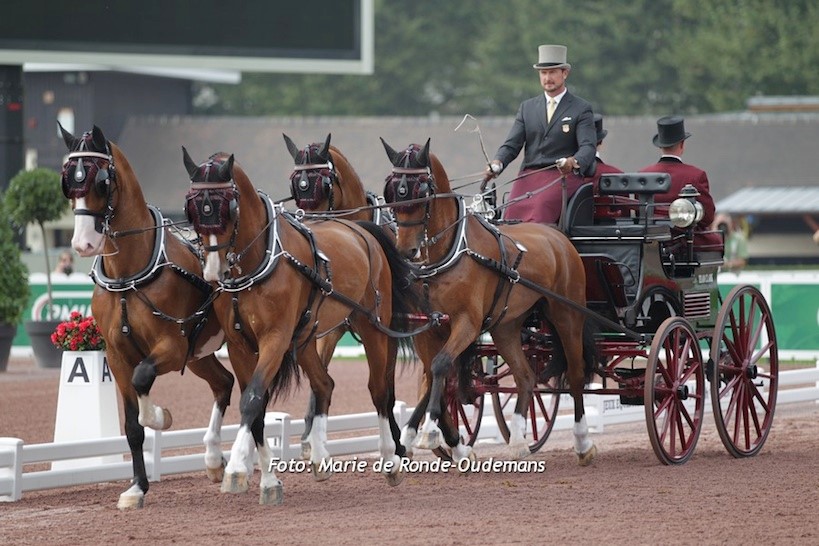 Ocala, FL (September 22, 2014) The cumulative achievements of USA’s Chester Weber in 2014 have held his ranking at number one in the world on the FEI Top Driver Award Standings for Four-in-Hand. The Ocala, Florida horseman, and the extraordinarily synchronized
team of matched KWPN bays he co-owns with Jane Forbes Clark, remain the leading Four-in-Hand team in the world, a position only further solidified by their Individual Silver medal finish at WEG.

“There’s really nothing that compares to reaching this point and sharing it with an incredible team of athletes and staff,” said Weber. “To reach number one requires a team of far more than a four-in-hand and I’ve been very lucky to work with incredible fellow horsemen. They too are number one.”

The FEI Four-in-Hand rankings are predicated upon proven success throughout the competitive season and Team Weber’s exemplary year across Europe and the US has spoken for itself. Well before WEG Normandy, and the German
Fahrderby at Riesenbeck, where he clinched the top world ranking after claiming both his third win there since 2004 (becoming its first American champion), and sixth with a second team, Weber threw a metaphoric glove down as a driving force to be reckoned with in 2014.

Team Weber has been indomitable all year, earning their FEI ranking with a string of victories including becoming the first American entry to win the Four–in-Hand at CAIO4* Aachen, personally accepting the victor’s trophy and congratulations at CAI3* Windsor from HRH Queen Elizabeth, defending an 11th USEF National Four-in-Hand Driving Championship and, true to Weber’s moniker, “Mr. Dressage,” setting an unprecedented record dressage phase score (30.89) at the Kingdom of the Sun CDE. No stranger to representing his nation in WEG Four-in-Hand competition,