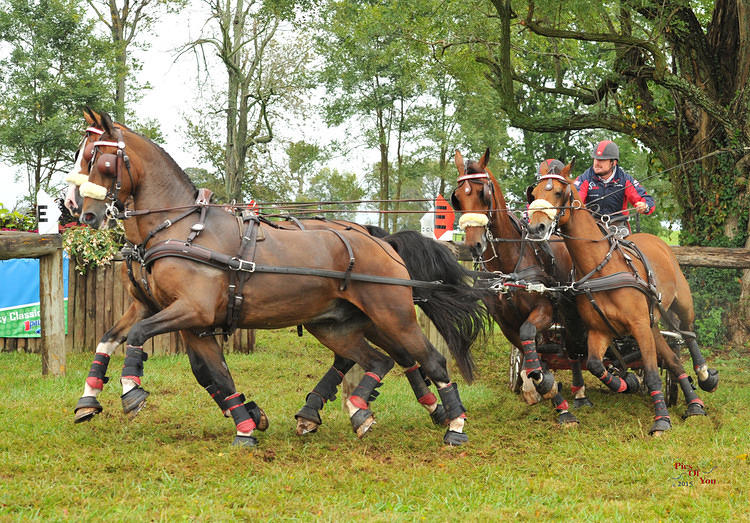 Louisville, KY (November 3, 2015) – Fresh off two consecutive wins in Kentucky, where he clinched his historic twelfth USEF National Four-in-Hand title followed by a victory in the FEI2* Four-in-Hand division at the Hermitage Classic CDE, Chester Weber had a chance to sit down with the Driving Radio Show to talk all about his endeavors. Hosts Glenn the Geek and Dr. Wendy Ying of Horse Radio Network covered topics such as the new horses joining the team that Weber and Jane F. Clark have put together, and Team Weber’s extraordinary record twelfth national title. They also took a look ahead at the 2016 edition of Live Oak International driving and show jumping competition, to be hosted by Weber and his family in Ocala, Florida, this February.

Weber is featured on Episode 224 of the Driving Radio Show, called “Chester Weber, Live Oak Announcements, and The National Drive.” Find and listen to the episode at any time at www.drivingradioshow.horseradionetwork.com.

Recounting his past summer competing in many Four-in-Hand competitions across Europe, Weber is glad to be back in the states. “Competing from May to September is a long time, it’s nice to sleep in my own bed again,” Weber joked, adding that it was even nicer to see his son, who just turned a year old. “He’s getting big. He’s walking. It’s exciting. I took him out in the carriage with the big horses. He’ll be driving his own team soon.”

Nurturing young talent has been part of this new father’s game plan for much of the season, as Weber introduced new horses Danzer and Zeppelin Let’s W to the competitions in Kentucky. “I’m really pleased. The young horses did really well and we’re using them for bigger and bigger tours.”

The inclement weather conditions Team Weber faced in Lexington to win their twelfth USEF National title, particularly in the Marathon phase, did not deter them from reaching their objective. “By European standards, it wasn’t muddy at all,” he grinned. “Our goal this season was the national championship, with a different grouping of horses. So it was a nice testament to have that, that this new group of horses could hat trick and win across all three phases,” said Weber.

While back in Ocala, Weber and his show management team are working on delivering another exceptional line-up for the annual Live Oak International competition. “It’s taking shape,” Weber told the radio show hosts. “It’s coming up early this year, at the end of February, and we have some interesting new things planned, like a kids’ play area, as well as exploring some new options for covering all the action during our live feed.”

The 2016 Live Oak International, as Weber enlightened, will debut a Preliminary jumper division on Saturday, a World Cup qualifying grand prix on Sunday, and there is a “pretty good chance” that the Budweiser Clydesdales will return for a visit. “The show,” Weber said, “continues to not stand still.”

Nor does Team Weber. Follow news, live posts, video and photo galleries of the national champion team, and their preferred product reviews at www.chesterweber.com. Find and listen to the episode at any time at www.drivingradioshow.horseradionetwork.com.