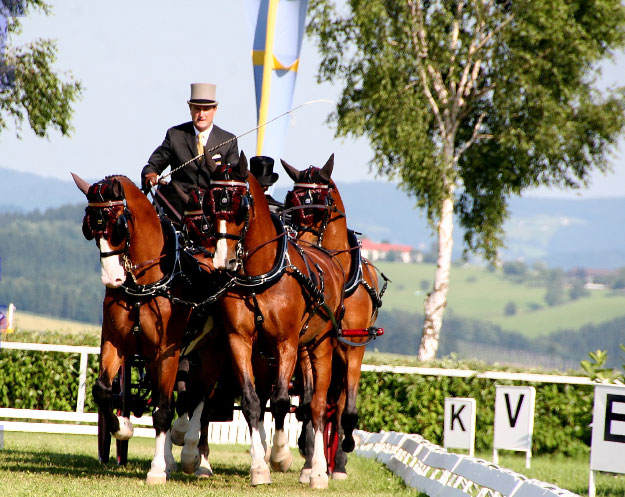 Ocala, FL (February 22, 2012) – Decorated combined driver Chester Weber will donate a package for Two Days ofTraining at the United States Equestrian Team’s “Salute to Driving” Fundraiser. The benefit is designed to raise funds for the discipline of driving, and Weber invites the winner to bring their own horses to enjoy two days of training at his prestigious Ocala training facility, Live Oak Stud.
The Third Annual Salute to Driving fundraising event will take place March 1-3 in Windsor, South Carolina. Each year, the event has raised money for the country’s High Performance Driving programs for the United States Equestrian Team Foundation. The weekend will feature a beautiful dinner and auction on Saturday evening, multiple driving clinics with some of the world’s top trainers, and a combined driving competition for Preliminary to Advanced level drivers on Sunday. Also included in the weekend are dressage clinics with Michael Freund and Sterling Graburn, harnessing demonstrations, carriage exhibits, a Driving Blind Cones activity with golf carts, and a mini-quadrille. The Salute to Driving fundraiser will be hosted by Chateau Log and Courage to Lead Farms in South Carolina.
“I am really looking forward to once again supporting the Salute to Driving weekend. Last year I donated two days of training, and it was very well received. I believe the USET is a very worthy cause and the money raised during this weekend will go toward sending the US driving athletes to international competitions,” Weber said.
Weber is known for his prowess in the discipline of combined driving, and has many wins and accolades to his name. He and his team of KWPN geldings took Individual Silver and helped propel the US team to a Bronze medal at the 2012 World Driving Championships in Riesenbeck, Germany. Known for his trademark record-breaking scores in the dressage phase, Weber was dubbed “Mr. Dressage” by the foreign media when he competed overseas during the summers of 2011 and 2012; he recently scored a 37.94 in the dressage at the 2013 CAI Little Everglades and set a new World Record with FEI Test 11. Weber also has many international wins under his belt and has won the USEF National Four-in-Hand Combined Driving Championship a record 9 times.
Not content to simply win championships, Weber has built a reputation for giving back to his sport throughout the years. By donating unique items and opportunities, Weber increases awareness and gives Combined Driving a good name. Bonnie Jenkins, the executive director of the United States Equestrian Team Foundation, said, “Its really nice when our world class drivers give back and continue to help their discipline.”
For more information on Weber and his combined driving team, visit their website at  www.chesterweber.com. For more information on the Salute to Driving weekend, contact Beverly Lesher at 717 554 1241 or nanabrl@aol.com.
Photo: Chester Weber, the nine-time USEF National Four-In-Hand Combined Driving Champion, will donate two days of training during the silent auction at the upcoming Salute To Driving USET fund raiser. He is shown here competing in 2011 at the CAI Altenfelden. (Photo courtesy of Marie de Ronde- Oudemans)