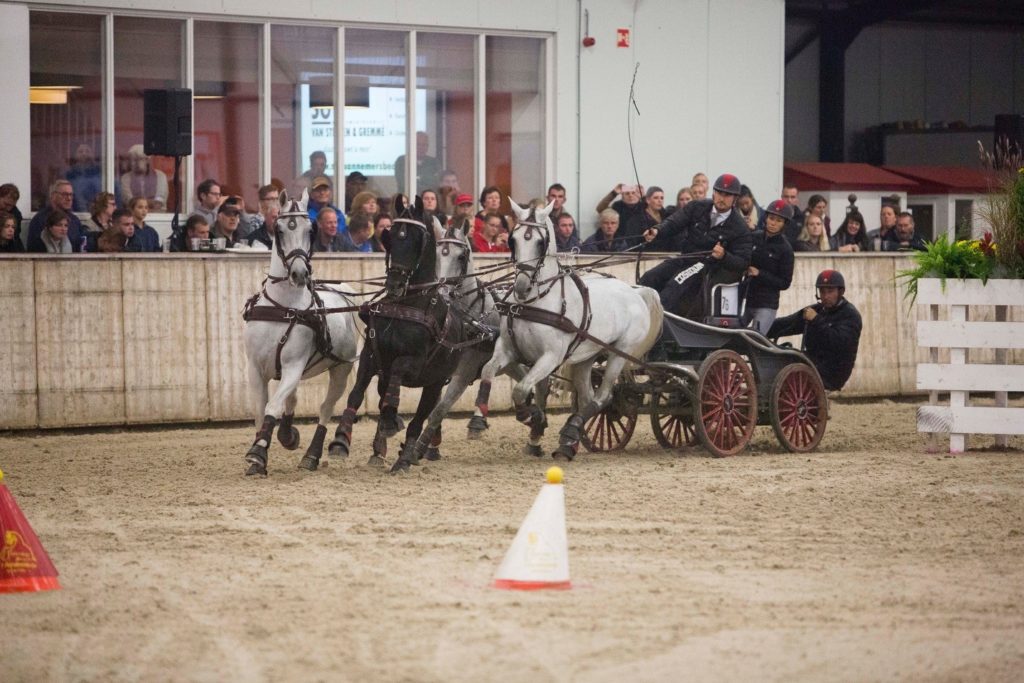 Ocala, Florida (October 13, 2017) — Fresh off of a win at the World Cup Qualifier at Donaueschingen, Germany, Chester Weber returned home to Ocala with his and Jane Clark’s team of KWPN’s for some well-deserved “R and R”. After a successful European tour culminating with Donaueschingen, Weber moved up the ranks to take over the number two spot on the FEI roster of top Four-In Hand combined drivers in the world and third on the list for World Cup Driving Team Qualifiers.

The current rankings are significant for Weber and his team since he is competing with this combination of horses for the first time internationally. Weber remarked, “I am so proud of my teams’ performance throughout the European tournament schedule. It’s really exciting to look forward to next year, to think of the possibilities with the combination of the seasoned veterans like Jane Clark’s Splash, and the new horses on the roster. They were a new team to competing together in international competition and they really have started to hit their stride.”

The KWPN’s are enjoying some quality pasture time back at the farm in Ocala, however, there will be little reprieve for the number two-internationally ranked FEI Four-in-Hand driver, “I will be racking up those Frequent Flyer miles, bouncing back and forth from Ocala to Europe to compete in the indoors,” Weber explained.

Weber’s recently acquired team of Lipizzans stayed behind in Europe to compete in the ongoing indoor tournament schedule. Weber will split his time between home and Europe throughout the fall season to hone his driving skills in the indoor competitions.

“Part of the reason we strategically decided to do the indoor World Cup is not only do we get to compete at some of the top show jumping and dressage venues in the world, but it also makes my timing better. And it makes me a better outdoor Marathon driver without a question,” explained Weber.

Aside from being one of the top ranked driving competitor’s in the word 14-time USEF National Combined Driving Champion Chester Weber is also dedicated to promoting the equestrian sport of driving on a national and international level. For Team Weber updates, results, photos, and combined driving news as the indoor competition in Europe continues, follow Chester Weber on his official Facebook page, Instagram @ChesterWeber, or visit www.chesterweber.com.